In the United States, greater educational attainment generally correlates with higher income potential. For instance, a medical doctor typically outearns someone with a bachelor’s degree, and so on. But like any rule, exceptions abound: some of the most successful American entrepreneurs skipped high school altogether.

Being your own boss is a popular goal among Amazon sellers, more than a third of whom rely on their ecommerce profits as their sole form of income. Clearly, selling on Amazon is a viable way to make a living, and we suspect the percentage of successful, non-degree holding sellers is higher than the labor statistics might suggest.

Perhaps there’s a better use for hard-earned savings than taking out college loans. Now may be a great time to explore alternative revenue streams by launching an ecommerce business.

To get the full story, we examined the data from our 2020 Amazon seller survey and spoke to dozens of Amazon entrepreneurs about what influence (if any) their schooling has had on their selling experience.

In the spirit of breaking norms, let’s run the numbers: do Amazon sellers who have formal or higher education have more success than others?

Amazon sellers are — for the most part — highly educated, with the majority (68%) having obtained some level of post-secondary education.

Here’s a breakdown of Amazon sellers’ highest level of education, ranked by the most common degree (or global equivalent):

We filtered our data to explore how Amazon sellers with different educational backgrounds managed their businesses — and how successful they were.

How does a degree affect an Amazon seller’s income?

Overall, most sellers reported profit margins between 21-50%, with performance across all groups falling sharply at the 51% mark.

Sellers with less formal education — those without high school diplomas, sellers with Associate’s degrees, and trade school graduates — dominated the profit margin battle. As the highest performers in the 26-50% profit margin range, they outflanked bachelor’s and master’s degree holders by leaps and bounds.

Notably, sellers with doctorate degrees achieved profit margins of 51-100% with greater success than all other groups, but were more likely than others to report being unprofitable.

In general, sellers with at least an Associate’s degree tend to earn more sales than those at lower education levels. But there are plenty of high performers who didn’t finish high school.

Monthly sales: Though high school and trade school graduates keep pace with degree holders from $0-10k/month, those with Associate’s, Bachelor’s, and doctorate degrees pull away at monthly sales of over $10k. As monthly sales climb past $25k, this higher education benefit generally levels off from a BA to an MA, and drops off significantly from an MA to PhD. As a cost-benefit matter, paying for each successive degree after an Associate’s doesn’t necessarily translate to higher monthly sales.

Lifetime sales: Similarly, the consistent high performers in lifetime sales have at least an Associate’s degree. To surpass your first million in lifetime sales, it may help to have attended college or graduate school. But, again, that’s not always necessary, as demonstrated by standout sellers with trade school and no high school earning within the $10-50 million lifetime sales range.

Millionaire sellers tended to be those with higher education, though there appeared to be no added benefit to extending schooling past an Associate’s degree.

However, it’s clear that 7-figure success is available to everyone: trade school grads and sellers with mixed amounts of high school education still make millions on Amazon.

In fact, sellers without a high school education thrived in the $1-5 million and >$10 million range, more so than any other group.

What do successful Amazon sellers say?

Echoing the qualitative survey data, sellers from all educational backgrounds shared with us the impact their formal education — or lack thereof — has had on their Amazon business.

Some Amazon sellers say they use their degrees, others do not, and many believe that whatever level of academic experience they achieved has prepared them for entrepreneurship in other ways.

Interestingly, many college graduates said that if they could go back in time, they’d skip college in favor of jump-starting their FBA journey.

This sentiment is reflected throughout the survey responses: 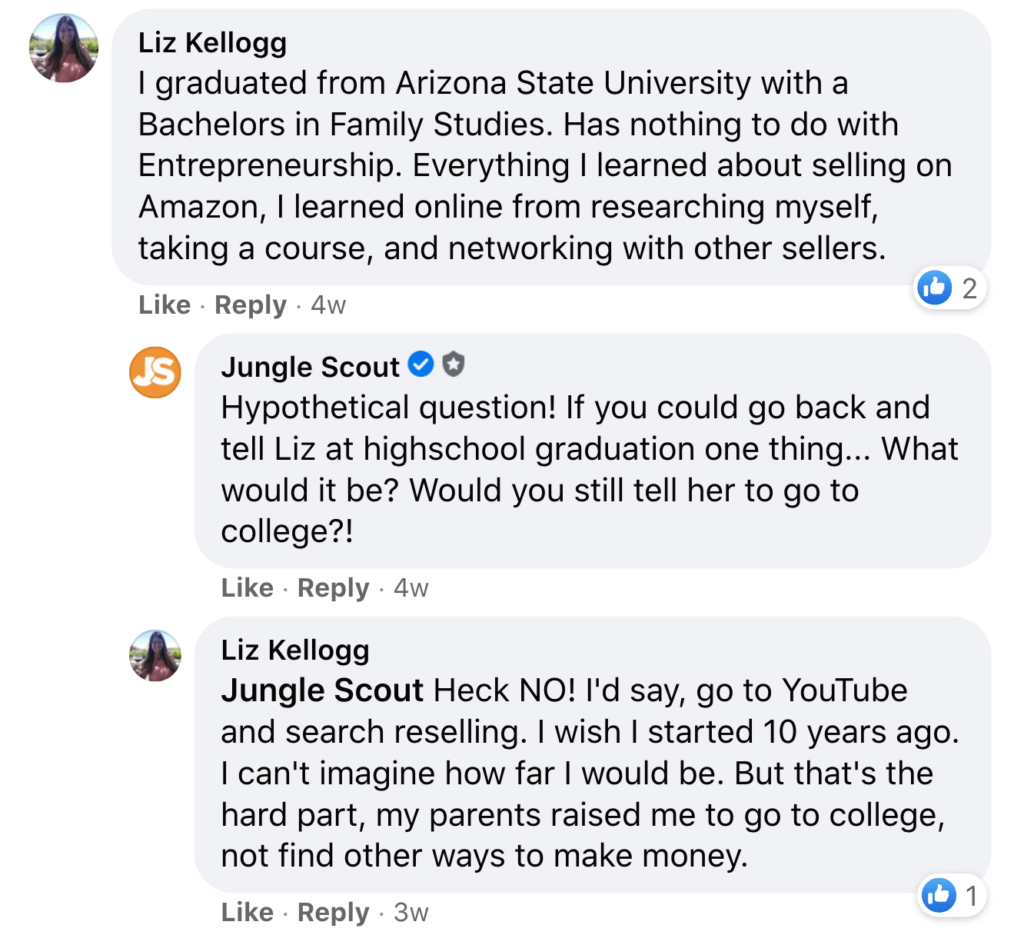 What do all Amazon sellers have in common?

Sellers from all educational groups reported similar levels of difficulty in solving the four biggest challenges in starting and expanding an Amazon business:

Even among sellers with advanced degrees in business-related fields, selling on Amazon comes with its own specific technical challenges.

The numbers don’t lie: you can succeed as an Amazon seller at any level of education. While having a degree tends to result in higher lifetime sales and profits overall, sellers with a high school diploma or less can still rake in millions through FBA.

As our respondents noted, the internet is exploding with opportunities to learn how to build an Amazon business. Here at Jungle Scout alone, we empower sellers with a variety of free, up-to-date educational resources, like our Beginner’s Guide, Million Dollar Case Study web series, and instructional webinars. Jungle Scout members also have access to expert-led training through the Academy.

If you’re not sure if college is right for you or you need a career change, take note from highly profitable Amazon sellers: your success could lie with FBA.

We want to know what you think. In what way has formal education helped you (or not) as an Amazon seller? Tell us how you learned your best practices in the comments below.

Data represents insights from Jungle Scout’s 2020 State of the Amazon Seller Report, in which 1,046 Amazon sellers representing all 14 Amazon marketplaces, 93 countries, and all relevant Amazon product categories shared information about their experiences selling on Amazon.